2018 was a year of change for Ryan Blaney. But also one of improvement and one to celebrate.

The 25-year-old High Point, N.C. native made the playoffs, advanced through the Round of 12 and made NASCAR history this season. He did it all with a new team, too, as he jumped from Wood Brothers Racing’s iconic No. 21 to “the mothership” in Team Penske, piloting the No. 12.

The change isn’t an easy one, but Blaney made it look relatively simple, coming out of the gate with five top-10 finishes in the first seven races (three top fives). He dominated the season-opening Daytona 500, leading 118 laps before wrecks caught up to him. He eventually held on for seventh.

Blaney also led 145 laps at Martinsville before being relegated to a third-place finish before dominating the first stage of Bristol. Unfortunately for Blaney and the No. 12, he was caught up in a wreck while navigating lapped traffic, ending his day.

The early summer stretch was hit or miss for Blaney. Following the trend, he led laps at Kansas before crashing (finished 37th), then blew an engine at Charlotte. Winning the pole at Pocono helped get the team back on track, as he earned a top 10 at the Tricky Triangle and Michigan in consecutive weeks.

But finishes of 34th at Sonoma, 18th at Chicago and dead last at Daytona stunted Blaney’s momentum of early June. However, the eight races leading up to the start of the NASCAR Playoffs injected some confidence into the group, earning four top-10 finishes and two top fives.

Although he hadn’t won yet, his playoff spot was all but secured if he just brought the car home in one piece for the rest of the regular season. Plus, celebrating his good friend Chase Elliott’s first career victory following Watkins Glen showed that Blaney wasn’t too worried about his position. 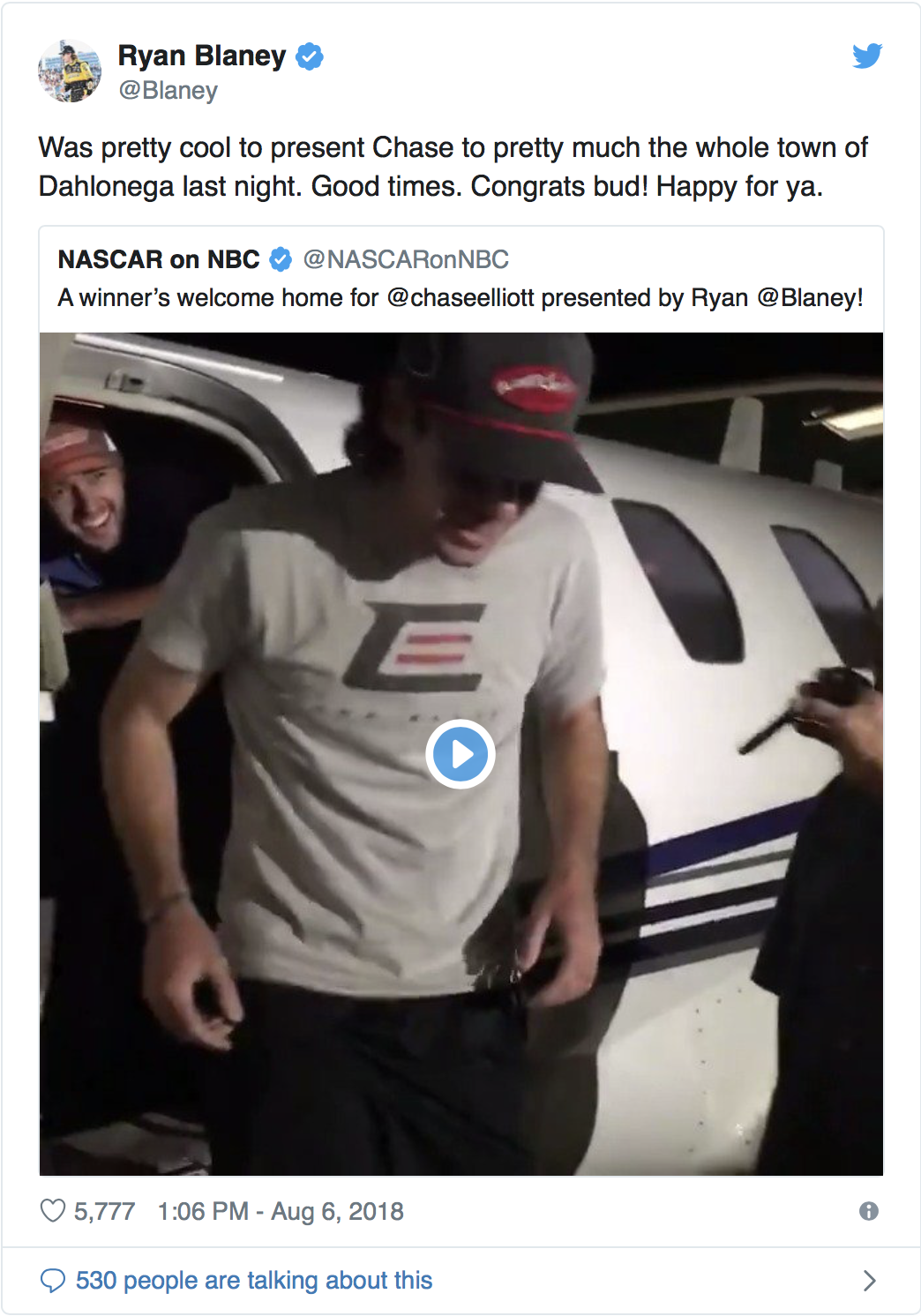 Consistency proved to be key throughout the regular season for Blaney and his Team Penske counterparts, as eventual champion Joey Logano had one race win and Brad Keselowski had two, both coming in the final two races of the regular season (Darlington and Indianapolis).

The first round of the playoffs wasn’t super kind to Blaney, posting finishes of fifth at Las Vegas and 19th at Richmond. That fringe top 20 run in Virginia put him on the bubble heading to the great unknown of the season: the ROVAL.

Through others’ misfortune, circumstances and a fast racecar, Blaney found himself in the lead coming off the final chicane with the checkered flag in sight. As Jimmie Johnson and Martin Truex Jr. spun, the No. 12 won the inaugural event at the Charlotte Motor Speedway ROVAL and punched his ticket into the Round of 12.

The Round of 12 wasn’t as kind to Blaney as the Round of 16 was, though. As the competition rose, Blaney didn’t sink, or swim. He just treaded water. Results of 11th at Dover, 29th at Talladega and seventh at Kansas weren’t enough to push Blaney’s season forward; he was eliminated from the playoffs.

Although he’d done it multiple times before, specifically in NASCAR’s Xfnity Series, the ROVAL victory shined light on what may have become the best new tradition after a win. 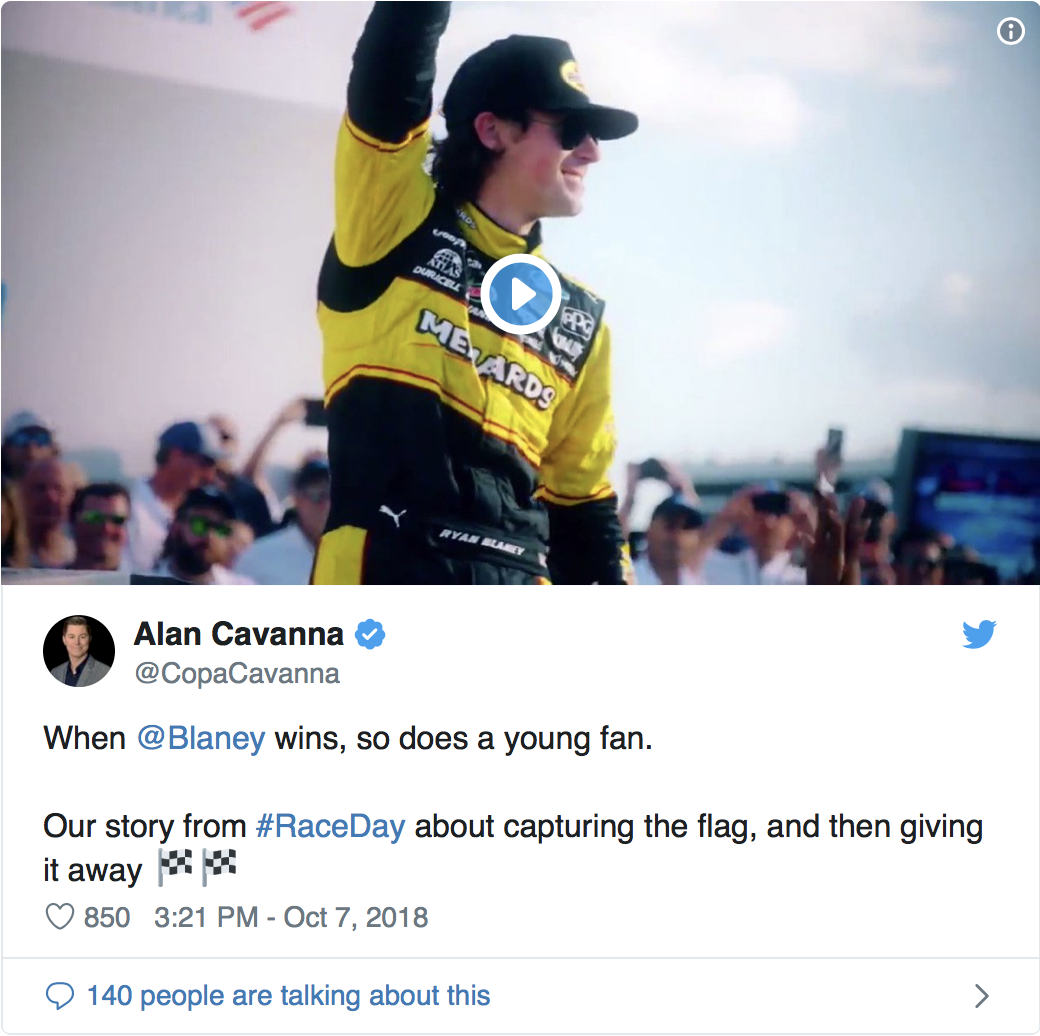 Heck, he even turned a Kyle Busch fan into a Ryan Blaney fan! That’s a tough task. Well done, Ryan.

The rest of the playoffs only saw two top-10 finishes, including a runner-up result to Kevin Harvick at Texas. He also won the pole for the 500-mile event, dedicating it to a fallen Team Penske member.

All in all, Blaney earned a career high in top fives (eight), top 10s (16), poles (three) and laps led (660). And he had a helping hand in bringing the captain his second NASCAR championship.

Prior to the start of the season, the hype surrounding the sport’s young drivers was through the roof. Some of it was for good reason; some was a bit overblown. Blaney was one of the faces at the forefront of that movement (which isn’t dead by any means, by the way). He equaled his win total from 2017, which could be considered a “stunt in growth” by some.

Sure, upgrading in team with the same crew chief in Jeremy Bullins with another year of experience under your belt would usually yield better results. But most expected unbelievably better performances; what they got was a solid improvement.

With the Glass Case of Emotion Podcast continuing its growing popularity, Blaney has seen his popularity grow as well. But for those who think he’s surpassed Chase Elliott, slow down… 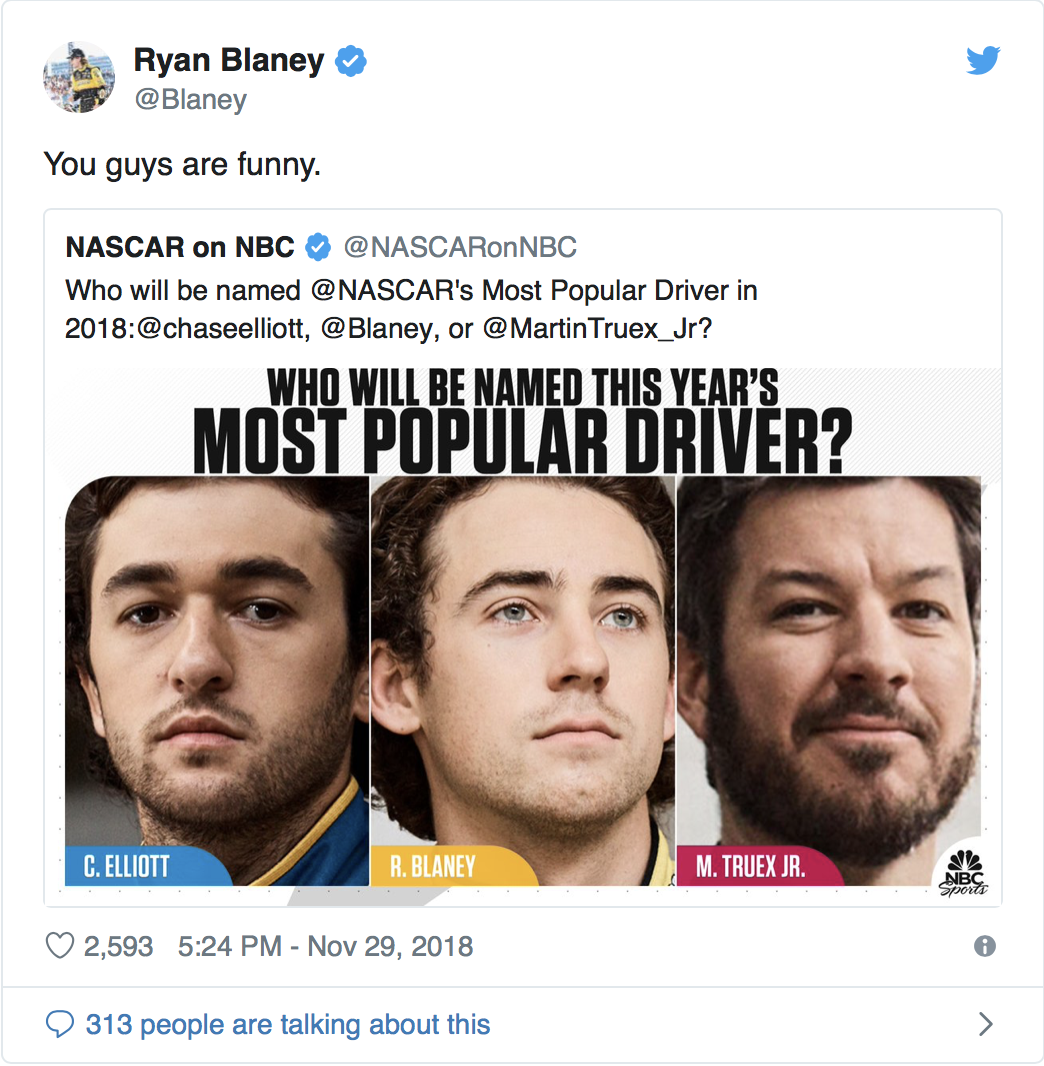 All in all, Blaney’s 2018 season was good. Nothing more, nothing less. I bet he’d tell you the same thing. Big picture wise, the dude has it made. Personality, talent, an elite team, stability, a driver/crew chief pairing eerily similar of his teammate Logano and Todd Gordon and a career that isn’t even close to peaking yet seems to be ready to yield Blaney even more success in 2019.