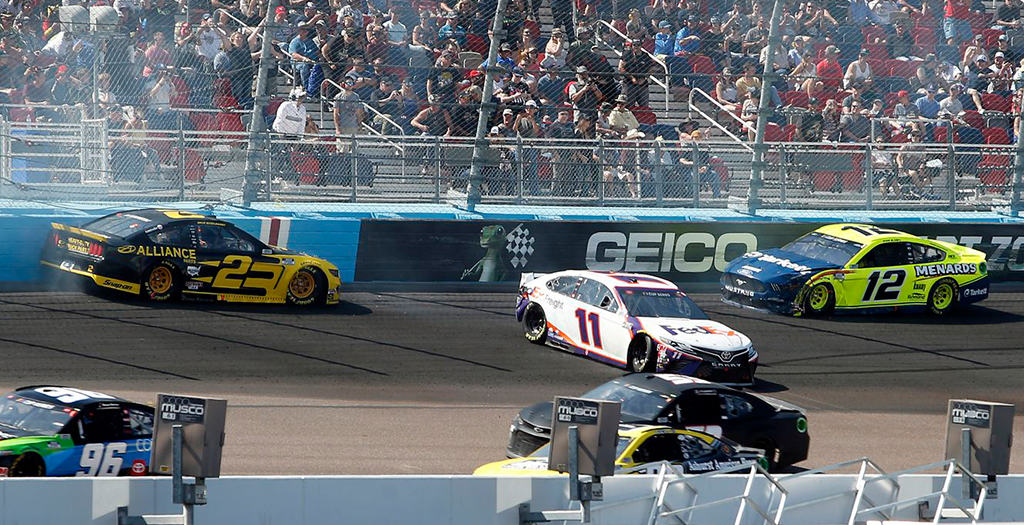 A multi-car crash damaged three early contenders Sunday at Phoenix Raceway as contact between the cars of Denny Hamlin and Brad Keselowski collected and knocked Ryan Blaney out of the NASCAR Cup Series points lead.

The melee caused the second caution period in the FanShield 500. Hamlin’s No. 11 Joe Gibbs Racing Toyota and Keselowski’s No. 2 Team Penske Ford made contact as the two entered Turn 3 on Lap 64. Both cars slid out of the groove, gathering up Blaney’s No. 12 Penske Ford.

All three cars swept into the outside retaining wall. Hamlin and Keselowski continued, but Blaney took his damaged car to the garage, ending his day.

“From the car, I couldn’t really see,” Blaney said after an evaluation at the infield care center. “A couple of us were three-wide. I was happy to be on the top. I thought we were going to roll the top pretty good through (Turns) 3 and 4 there. It looks like the 11 tried to send it in there below the 2 and got loose and hit him and then overcorrected and got us. We got up in the dirt, and we just ran right into the fence. Just an innocent bystander there. It sucks to have it end so early like that and have that happen so early in the race.

“I do really hate it for Menards and Tarkett and Ford. We didn’t even have a chance to work on our car. We weren’t great the first run, but we made a big swing at it and we don’t know how that change was. It stinks when you are taken out like that. We will just go on to Atlanta (Motor Speedway) and see what we can do.”

Blaney entered the event atop the Cup Series standings, but he absorbed a 37th-place finish and his first DNF since last October at Dover International Speedway. Hamlin continued at a reduced pace and finished 20th.

Keselowski fared the best, recovering nicely with minor damage and charging back to win Stage 2. He led 82 laps but slipped to an 11th-place result after a series of late restarts gummed up his team’s pit strategy and victory chances.