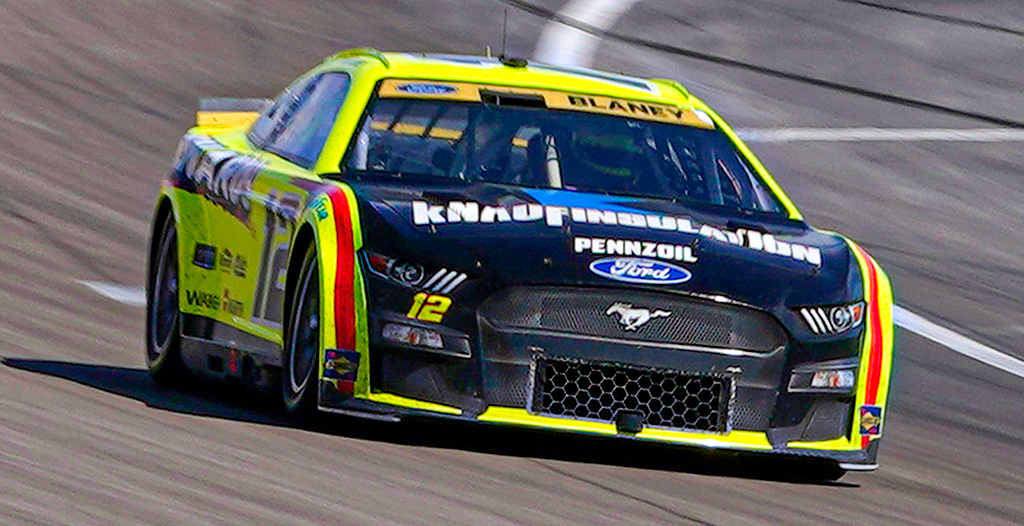 BLANEY PICKS UP STAGE POINTS IN VEGAS, BUT GETS LOOSE IN VEGAS

Race Rundown: Ryan Blaney drove the No. 12 Menards/Knauf Ford Mustang to a 28th-place finish at Las Vegas Motor Speedway on Sunday afternoon to open up the Round of 8 in the NASCAR Playoffs.  Blaney had a great qualifying run to start the race from the fourth position, and raced into second before eventually falling to fifth at the end of Stage 1.  Fighting rear grip on the Menards Ford Mustang, interim crew chief Miles Stanley would make minor adjustments during the stage break, bringing Blaney’s car to life.  The Menards/Knauf Ford would drive to the front of the field, taking the lead on lap 129 and holding the top spot until the end of the stage, earning his series-best eighth stage victory of the season.  As the final stage began, Blaney avoided trouble not once, but twice when nearly having contact with his competitors while running within the top-five.  Despite the close calls, the Menards Mustang continued to be a fixture up front while his competition experienced various issues.  Unfortunately, the problems would bite Blaney with less than 40 laps to go, as he would get loose going into turn one and slam into the outside wall.  The Menards team would make repairs, but lose multiple laps in the process  He would eventually finish 28th in the event.

Blaney’s Thoughts: “Just got loose and got into the wall. Sucks to not take advantage of having such a fast car.  Our Menards Mustang was quick – just need to finish it off.  Good thing is, we had a great test at Homestead. Hopefully we can go there and pick up a win and join Joey in Phoenix.”