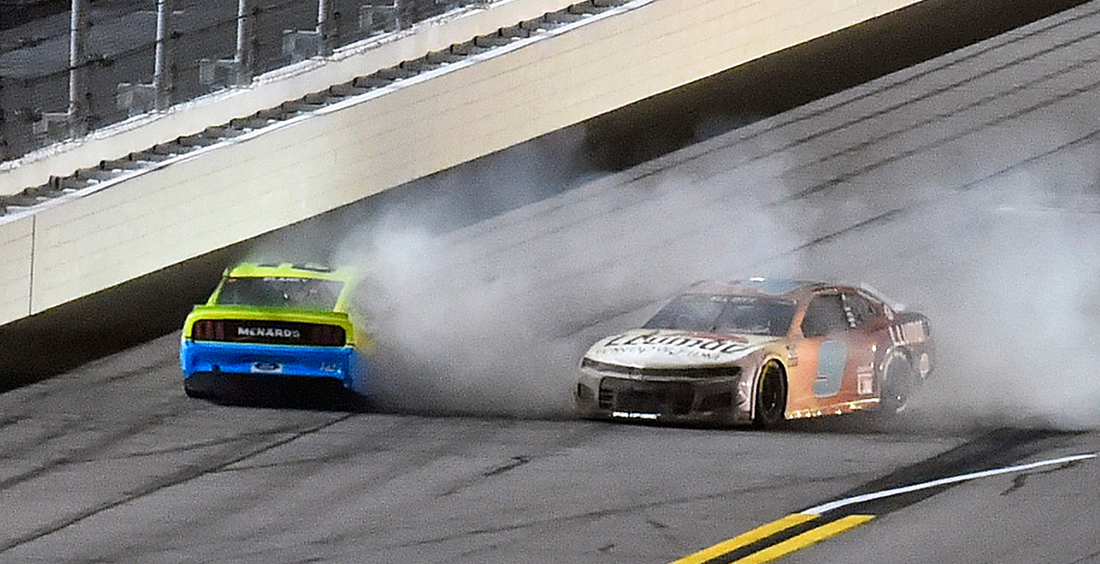 Fast friends Chase Elliott and Ryan Blaney have had run-ins before, an eventuality that’s been bound to happen given their competitive nature in the NASCAR Cup Series. After a collision that sidelined both drivers in 2016 at Kentucky, Blaney made his buddy dinner as a way to make amends.

Elliott might need to locate his own chef’s apron after Tuesday night’s lid-lifting Busch Clash on the Daytona International Speedway Road Course, where the two chums crunched together in a final-lap, final-chicane tangle. That coming-together allowed Kyle Busch to squirt through for the exhibition victory while Elliott salvaged second place. Blaney took the worst of it, walloping the outside retaining wall with his Team Penske No. 12 Ford finishing an unlucky 13th.

Both drivers showed strength in search of their first Clash win, especially in the late stages where they each swapped the lead in the final eight laps. Their duel bubbled over in the final kink before the start-finish line, with Elliott forcing his No. 9 Hendrick Motorsports Chevrolet with an inside-line squeeze that cost his friend dearly.

Elliott briefly spoke to Blaney post-race, and later indicated that he wasn’t necessarily afraid to initiate contact but that the severity of the outcome wasn’t his intent.

“Obviously, I’m thinking that I can pass him and win the race or I wouldn’t do it,” said Elliott, the defending Cup Series champion. “Coming into a tight corner there, I drove in so hard and I was to the right — my angle was really bad, I just had to stop to try to make the corner, and at that point, we’re side by side, trying to stay off the curb. We both know that the curb, you don’t want to hit it any more than you have to. Yeah, I hate it. Like I said on TV there, I certainly don’t want to wreck him out of anybody, and more than anything I hate neither one of us won. I hate to hand it to somebody else like that.”

Interestingly, Blaney notched his only road-course win in 2018 at the Charlotte Road Course in a similar manner, capitalizing when Jimmie Johnson and Martin Truex Jr. crashed in a last-lap contest for the lead on that track’s final chicane. This time, he was on the losing end in the front-two mix.

Blaney said that this year’s road-race twist on the Clash was likely a fun watch for fans. His own participation, he said, was a little less fun.

“Am I going to make the same move if we’re in the same position two weeks from now? Hell, yeah. I mean, why not. But I told him, if you’re going to make a move like that, make sure at least you win the race. Don’t hand it to the third-place guy. Granted, it’s very ironic me saying that because I won the Roval that way being the third-place guy. To answer the question, yes, I would make the same move he did, but maybe do it a little bit differently if I was in the same spot in a couple weeks.”

The “couple weeks” reference is a nod to the Cup Series’ return to the Daytona road course for Race No. 2 of the points-paying schedule on Feb. 21. Time will tell if a make-good dinner occurs between now and then.

“Listen, hey, we’re really good friends off the race track, but we’re both really hard competitors and we race each other really hard,” Blaney said. “So I know he’s going to make a big move. Any competitor would. If you don’t go in there trying to win the race, what are you there for?”