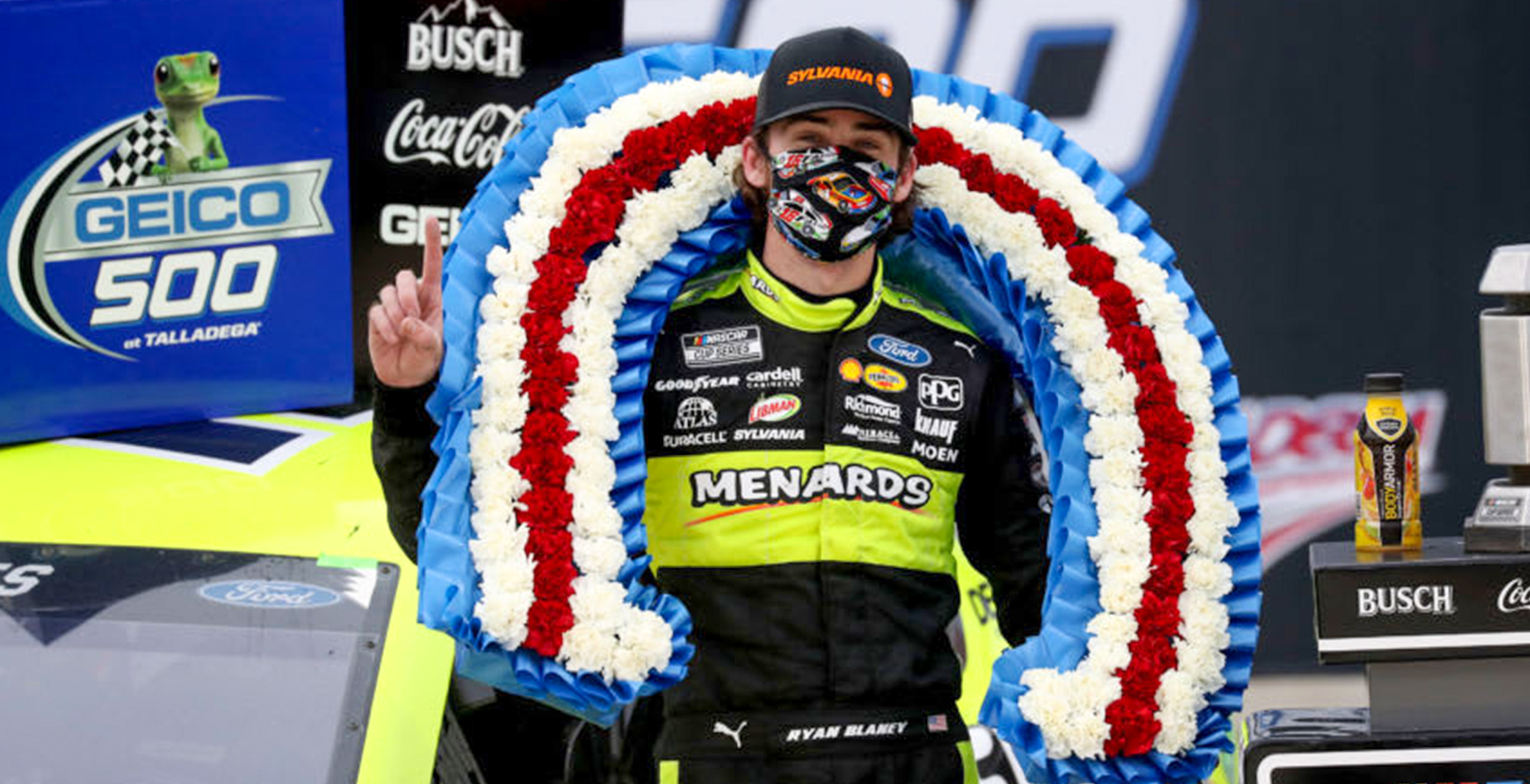 IS THE RYAN BLANEY CHAMPIONSHIP HYPE FOR REAL?

Ryan Blaney’s win at Talladega Superspeedway shot him to third place in the NASCAR standings and locked him into the playoffs after he saw multiple potential wins escape him earlier in the 2020 season. Is the championship hype surrounding the Team Penske driver for real?

Taem Penske’s Ryan Blaney easily could have entered this past Monday’s NASCAR Cup Series race at Talladega Superspeedway with three or four victories to his name through the first 12 races of the 2020 season.

Instead, the 26-year-old was simply considered the top driver who had not yet won a race to punch his ticket into the playoffs, just like he had been entering many recent races.

But at the same venue where he secured his lone win last year en route to a career-high seventh place finish in the championship standings, Blaney was victorious again — and by the same winning margin of 0.007 seconds, this time over Ricky Stenhouse Jr.

Blaney’s speed has been unmistakable so far this season, and he now sits in third place in the championships standings, just two points shy of teammate Joey Logano.

While he is the only one of Roger Penske’s three drivers without multiple wins through the season’s first 13 races, he has shown the most speed of the three. See the end of the Las Vegas Motor Speedway as evidence to back that up.

As stated, he should have had multiple wins coming into Monday’s race. He led the season opener at Daytona International Speedway after Ryan Newman’s horrific last-lap crash, but Denny Hamlin was able to inch past him in the closing few feet to secure his third Daytona 500 win in the last five years.

Then in the aforementioned race at Las Vegas Motor Speedway, he was positioned to win before a late caution flag period led to him making a pit stop for new tires while Logano inherited the lead by staying out on old tires. Logano went on to win while Blaney finished in a disappointing 11th place.

In the last seven races, Blaney has finished outside of the top four just once, and that poor result came at Bristol Motor Speedway when he crashed while battling at the front. His average finish otherwise is a series-best 2.67. All seven of his top 10 finishes so far this season are top four finishes.

The speed is clearly there for Blaney to win a championship. But is the execution?

Blaney has led a ton of laps at all kinds of tracks since joining Team Penske ahead of the 2018 season, and that has been the case so far in 2020 as well. He has led laps in nine races so far this season, including in each of the last six.

However, as far as the execution is concerned, the driver of the #12 Ford has a bit to work on.

Sure, he is fast pretty much everywhere, and he is coming off of a victory in which he led more laps than anybody else in the field. But looking at Blaney’s wins, he has yet to win at a so-called “regular” track (or as Kyle Busch would say, a “real” track) in two-plus seasons driving for the Captain. He has yet to have that defining breakthrough moment.

He secured his first win for Team Penske at the Charlotte Motor Speedway Roval in 2018 due to being in the right place at the right time after a bold move by Jimmie Johnson in the final turn on the final lap took both himself and Martin Truex Jr. out of contention.

His other two wins as a Team Penske driver thus far came at Talladega Superspeedway — by a combined 0.014 seconds.

While he now has four career victories, he hasn’t won a non-“wild card” race since he secured his first win at Pocono Raceway in June of 2017, and that was when he was still driving the #21 Ford for Wood Brothers Racing.

Blaney hasn’t led the entire final lap in any one of his three Team Penske victories, and he has led the penultimate lap only once, with that having taken place in the race at Talladega Superspeedway last October when he held off Newman to win by 0.007 seconds.

So is Blaney really the championship frontrunner his speed would indicate, given how his wins have been earned?

He is a serious contender, as a win is a win and he has been able to produce top-tier results when he hasn’t been in victory lane, which has proven to be crucial to playoff success.

But I don’t buy him being one of the favorites at this point. He has been victorious in four straight years, but he has never won more than one race in a single season. Of course, that could change. He is slated to have up to 23 opportunities to change that throughout the rest 2020, and if he can change it at a “regular” track, even better.