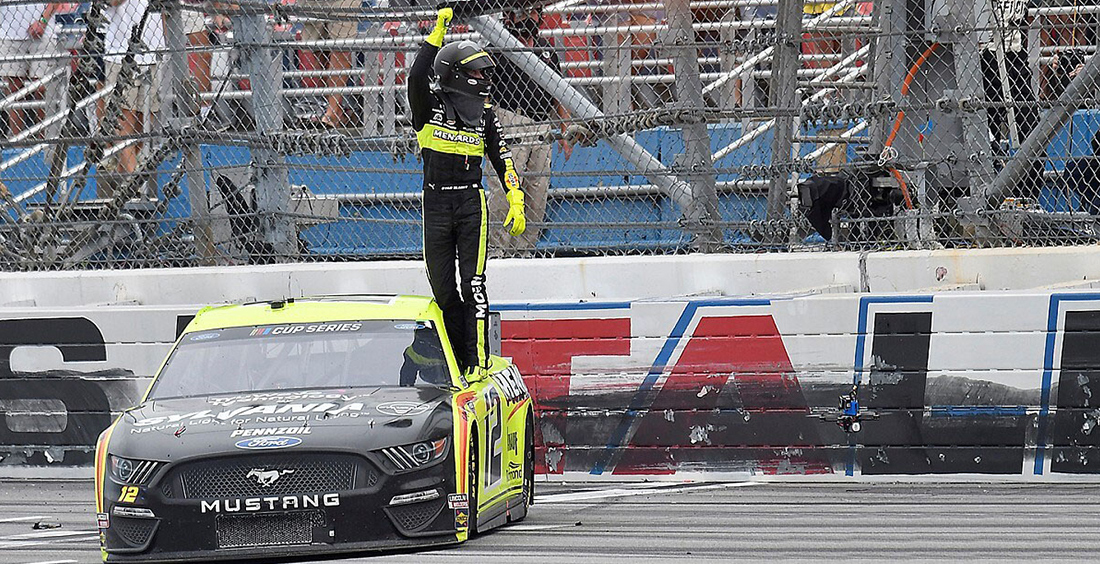 The 2020 NASCAR Cup Series (NCS) brought a season of change for Ryan Blaney and the No. 12 Menards/Advance Auto Parts/BODYARMOR/DEX Imaging Ford Mustang team. Paired with 2018 champion crew chief Todd Gordon for the first time, Blaney earned a victory and raced his way into the NASCAR Cup Series Playoffs for the fourth consecutive season.

Blaney showed speed early in the season. He came tantalizingly close to winning the Daytona 500 and captured the series points lead one week later at Las Vegas Motor Speedway with an 11th-place result following a late-race caution that prevented the team from winning the race. Blaney posted another strong run at Auto Club Speedway, until a tire issue late in the race forced an unscheduled pit stop and, once again, derailed a winning result. An early-race accident at Phoenix saw Blaney fall from the points lead to sixth in the NCS standings.

After a two-month break in the racing season due to the COVID-19 pandemic, NASCAR returned to action at Darlington in early May, as Blaney and the No. 12 Ford team continued their strong performance on track.  Blaney reeled off two consecutive third-place finishes at Charlotte Motor Speedway, first in the Coca-Cola 600 and another just a few days later in a mid-week event. He led 60 laps and was in contention for another strong finish at Bristol before he was sidelined by a crash on lap 199 of the 500-lap event.

The next four races yielded top-five finishes at Atlanta, Martinsville, Homestead and a thrilling victory at Talladega Superspeedway in June. The victory marked Blaney’s second consecutive win at Talladega and he became the first driver since Jeff Gordon in 2007 to win back-to-back races at the 2.66-mile superspeedway. His margin of victory (.007 seconds) was identical to his close win in the 2019 fall race and he also led the most laps (63) on the afternoon.

As the series rolled through the summer months, Blaney and the team worked hard to try and produce consistent results. Strong top-10 finishes at Kentucky, Texas, Michigan, were offset by three finishes outside the top 20. But the driver of the No. 12 Ford Mustang put together a respectable finish to the regular season (highlighted by a sixth-place effort in the regular season finale at Daytona) in August to clinch the sixth seed in the NASCAR Playoffs.

Unfortunately, before the green flag waved at the Southern 500 at Darlington Raceway, the No. 12 team was assessed 10-point penalty for a pre-race inspection violation and Blaney had to start the race from the rear of the field. With a 24th-place in the event, the team didn’t get off to the start it wanted or needed in the playoffs. A 19th-place finish followed at Richmond and after a 13th-place result at Bristol, the title hopes were dashed for the No. 12 Ford team in the NASCAR Playoffs Round of 12.

Blaney and team rebounded with a strong finish to the season over the final seven races of 2020. With five top-10 finishes, highlighted by a second-place effort at Martinsville, Blaney showed the promise of the team and built some momentum heading into 2021. Over the final eight races Blaney climbed from 16th in points to finish ninth in the final Cup Series standings. Blaney tied a career-high with 11 top-five finishes (11) and led 668 laps to surpass his single-season career high.

“Overall, it was a good season for our No. 12 team,” said Blaney. “Todd (Gordon) and I worked well together, and we showed a lot of speed this season. Certainly, felt like we had a few races I’d like to have back, but we have something to build on looking towards 2021.”