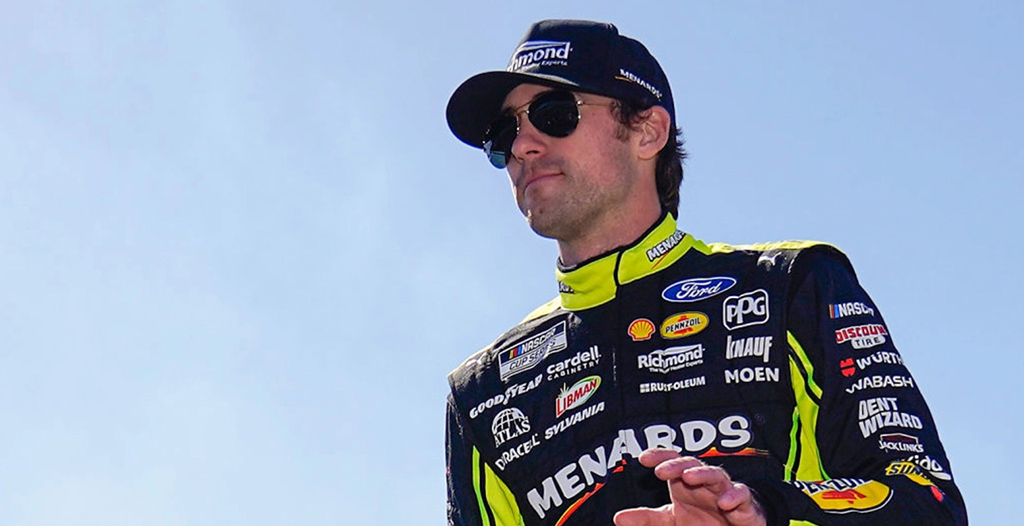 NASCAR POWER RANKINGS: RYAN BLANEY CLIMBS TO NO. 1 AFTER RICHMOND

Denny Hamlin snagged his first win in the Next Gen car at Richmond Raceway, but a rocky start without a single top-10 finish in the prior six races holds him out of this top 10 for the time being. Christopher Bell and Kevin Harvick remain on the verge of breaking into this list as well but haven’t cracked through quite yet.

Meanwhile, as drivers rise up, that means others must fall. Take a look at who falls where after seven Cup races:

1. Ryan Blaney (Last week: No. 2) Tied with Chase Elliott for the points lead, Blaney also becomes the new leader of the Power Rankings. Blaney leads the series in average running position at 9.25, according to NASCAR’s loop data statistics, as well as in laps led (334), poles (three) and fastest laps run (110). The obvious knock so far is that the No. 12 Ford has yet to win a race and perhaps puts his top spot in question. However, Blaney has led laps in every race this season and has been a consistent threat to win despite myriad new faces at the front of the field. That consistency earns him the No. 1 position for now — but he has to capitalize on that potential soon to keep it.

2. Ross Chastain (Last week: No. 1) Chastain never quite showed the same speed at Richmond that he and his Trackhouse Racing team showed in the prior four races. His four-race streak of top-three finishes came to an end with a 19th-place effort in Virginia. The No. 1 Chevrolet wasn’t a factor Sunday and particularly fell off in the final run. Yet Chastain still posted the sixth-best average running position at Richmond (7.72) and sits seventh in that category overall (13.054). The performances Chastain have shown lately anchor him toward the top of this week’s list despite the poor showing last weekend.

3. Kyle Larson (Last week: No. 6) Larson jumps back up the rankings this week after a good showing at Richmond, notching a fifth-place finish for his third top five of the year. His season has been hit-or-miss, but Sunday marked the first time in the last four races he finished better than 29th. The defending champion will need more consistency, but he and crew chief Cliff Daniels have earned the benefit of the doubt to expect the No. 5 Chevrolet up front.

4. Tyler Reddick (Last week: No. 3) Reddick was surprisingly not a factor at Richmond Raceway on Sunday. The No. 8 car posted the 14th-best average running position and finished 12th, his first result outside the top 10 without an on-track incident to blame. Like Blaney, Reddick has shown enormous potential with the Next Gen car and can easily be a factor for wins down the road. But Reddick’s search for his first career win continues. And while that pursuit is by no means easy, Reddick and his crew have to pounce on those opportunities before their momentum vanishes.

5. William Byron (Last week: No. 8) Speaking of momentum, the No. 24 team has finally found some. After a shaky start to the season, Byron led a career-high 122 laps at Richmond and seemed destined for a win until Hamlin and Harvick charged through on fresher tires to send Byron back to third. That is Byron’s second straight top five on an oval and third of the season. There remains a need for better consistency — his last five weeks show finishes of fifth, 18th, first, 12th and third — but Byron is trending upward this week.

6. Chase Elliott (Last week: No. 4) Elliott left Richmond tied with Blaney for the points lead and was a top-10 car through much of the race, but Richmond wasn’t a particularly inspiring day for the 2020 champion. Elliott came home 14th after notching sixth-place finishes in both stages Sunday. But Elliott remains the series leader in average finish (10.9) and sits second to Blaney in the season-long average running position (11.014), so there should be some optimism for him and his fans entering Martinsville, where he won in the fall of 2020.

7. Alex Bowman (Last week: No. 7) Bowman sits second behind Elliott, his Hendrick Motorsports teammate, in average finish this year (11.7). Bowman placed eighth at Richmond after posting the 15th-best average running position of the day. Crew chief Greg Ives was “not happy” with the result though, believing the car had more speed. But the truth is that the No. 48 team is finally finding the consistency it has lacked. Bowman earned his fifth straight finish inside the top 15, backing up his Las Vegas victory and runner-up result at Circuit of the Americas.

8. Joey Logano (Last week: No. 5) Joey Logano found himself out of the hunt for the win at Richmond. He boasted the ninth-best average running position at 9.18, but the No. 22 team had trouble jacking the car on pit road during the final caution with roughly 140 laps to go. Logano had entered pit road second and restarted 20th. He never recovered and finished 17th. Logano, the 2018 champion, has led laps in all but one race this season (Las Vegas), but two straight finishes outside the top 15 sink Logano’s ranking this week.

9. Martin Truex Jr. (Last week: Unranked) The No. 19 team is back in the rankings. Truex looked to have the car to beat at times Sunday, leading a season-high 80 laps before finishing fourth. Pit strategy caught the 2017 champion behind Byron though, even before Hamlin and Harvick bolted through the field. His lone finish outside the top 13 this season was a 35th-place result at Phoenix after a late-race incident. Like Harvick, Truex has largely flown under the radar. But Truex put his Toyota out front and was a legitimate threat for the win all day at Richmond. With more short tracks ahead, Truex may be at the start of a significant run.

10. Kyle Busch (Last week: No. 9) Busch rallied to a ninth-place finish at Richmond despite a late-race stop-and-go penalty that was assessed for tape placed on the nose of his No. 18 Toyota. Sunday marked another what-could-have-been moment for Busch, who was running sixth at the time of his penalty. Busch had the fourth-best average running position of the day at 6.35. If the two-time champion can have a clean race, he’ll likely finish inside the top five. That was proven at Las Vegas where he nearly won before an overtime restart relegated him to fourth. Until then, Busch will have to keep digging out of holes.