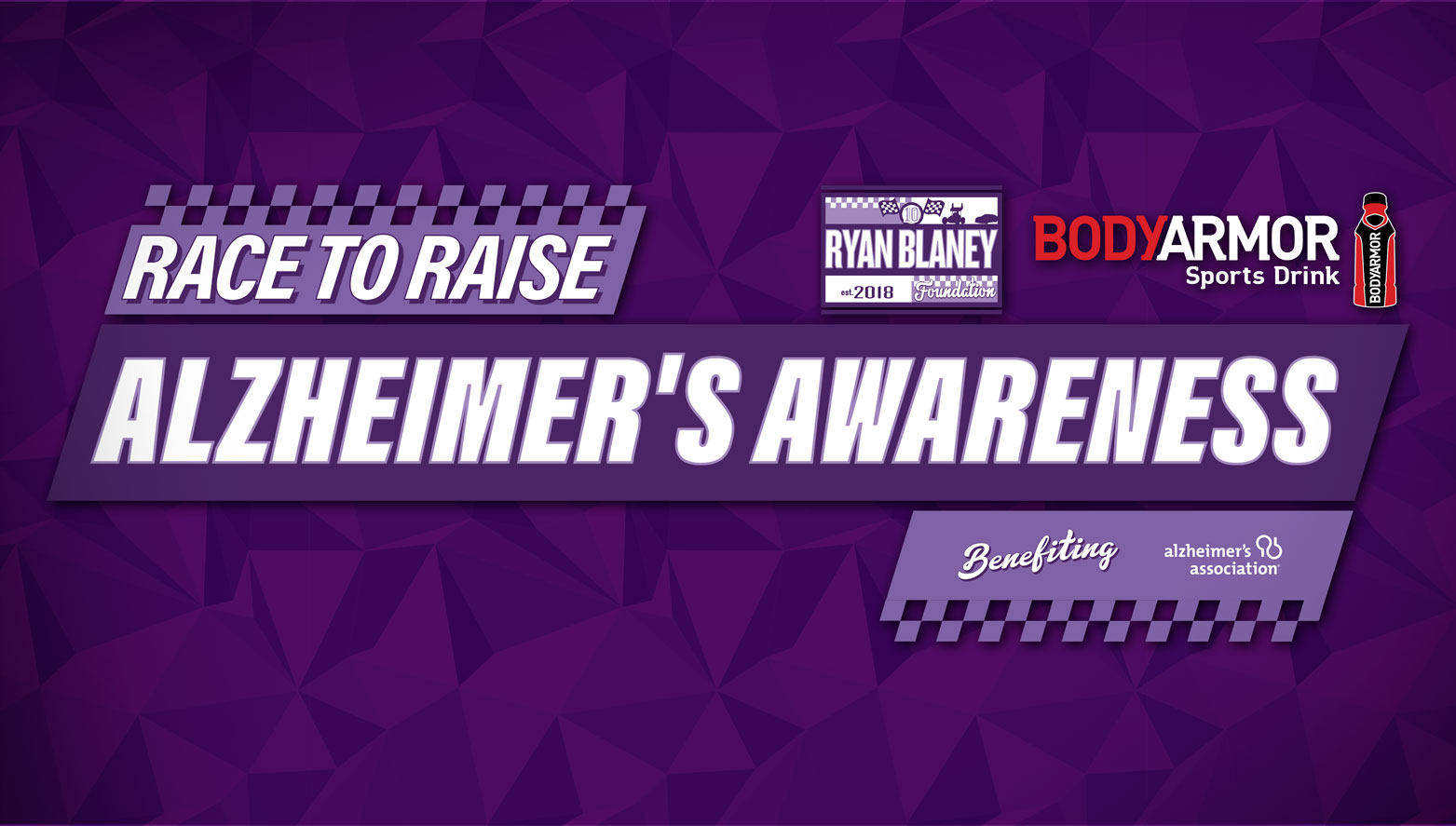 CHARLOTTE, NC – May 6, 2019 – The Ryan Blaney Family Foundation (RBFF) along with NASCAR superstar Ryan Blaney, today announced the launch of their “Race to Raise Alzheimer’s Awareness” program. BODYARMOR, which will serve as the primary sponsor of Blaney’s #12 Team Penske Ford Mustang in the NASCAR Cup Series race at Chicagoland Speedway on June 30th, will be supporting the program and has provided the decklid (trunk) of the car to the RBFF as part of the Foundation’s efforts to raise Alzheimer’s awareness. Through this unique program, the Ryan Blaney Family Foundation and BODYARMOR are providing NASCAR fans with a special way to honor loved ones who have been impacted by Alzheimer’s disease.

Beginning today and running through June 3rd (or until 160 names have been submitted) fans will have the chance to submit the name of an individual affected by Alzheimer’s and have it appear on the decklid of Blaney’s #12 Team Penske BODYARMOR Ford Mustang at the Chicago race which takes place during Alzheimer’s and Brain Awareness Month. To participate in the program, fans can visit www.RyanBlaneyFamilyFoundation.org,make a donation $150 to the Foundation, and submit the name of the individual being honored. Upon completion of the race, each name on the decklid will be cut out, signed by Blaney, and mailed to the individual who submitted thename.

“BODYARMOR has been an incredible partner and the relationship I have with their team is very special to me,” said Blaney. “They expressed their belief in me as a brand ambassador as I started my career in the Cup Series and that has grown to include their sponsorship of my Team Penske

Ford Mustang. For BODYARMOR to now take that even further and support my Family Foundation and a cause that is very personal to me and my family, it speaks volumes and I am beyond grateful.”

“Ryan Blaney has been a tremendous partner for BODYARMOR over the last few years, both on and off the race track.” said Michael Fedele, VP of Marketing, BODYARMOR. “We are pleased and excited to support Ryan, his Family Foundation and their incredible efforts around this Alzheimer’s Awareness program.”

“The Alzheimer’s Association is honored to have Ryan, the Ryan Blaney Family Foundation and BODYARMOR join us in the fight to end this devastating disease,” said Donna McCullough, chief development officer for the Alzheimer’s Association. “Having the names on Ryan’s decklid in partnership with BODYARMOR will not only raise crucial funds for Alzheimer’s care, support and research programs, but also shine a light on the more than 5 million Americans currently living with Alzheimer’s disease and the more than 16 million friends and family members caring for them.”

To jump-start the “Race to Raise Alzheimer’s Awareness” program, Blaney recently donated an auction package to the Alzheimer’s Association’s 32nd annual Chicago Rita Hayworth Gala on  May 4th. The highest bidder will receive a set of two (2) NASCAR Cup Series credentials to the Chicagoland Speedway race in June, suite access, a VIP behind-the-scenes tour, a personal meet- and-greet with Blaney, as well as the Alzheimer’s Association-branded race gloves that Blaney  will wear during the June 30th race. Blaney will continue to support the Alzheimer’s Association throughout the year and encourages fans to donate and contribute to Alzheimer’s research through the RBFFwebsite.

2019 marks Blaney’s second year driving full-time for the legendary Team Penske. With four (4) top-5 finishes, a pole position, and over 350 laps through the season’s first nine (9) races, the season is off to a strong start. Off-track, Blaney continues his efforts with the Family Foundation. Established in 2018, the RBFF is a 501(c)3 organization dedicated to supporting causes that have personally impacted the Blaney family. Blaney’s grandfather, Lou Blaney, passed away from Alzheimer’s in 2009. Between 1958 and 2009, Lou Blaney raced his way across the midwestern dirt-track scene and was beloved figure within the community. He earned more than 600 victories and several championship titles during his tenure as a sprint-car and modifiedracer.

BODYARMOR is a premium, sports drink that provides superior hydration. It  is  packed withelectrolytes,coconutwaterandvitaminsandislowinsodiumandhighinpotassium.

roster of professional athletes who are also investors in the company, including James Harden, Mike Trout, Anthony Rizzo, Andrew Luck and Dustin Johnson, among others. Kobe Bryant is one of the top shareholders in BODYARMOR. In August 2018, The Coca-Cola Company purchased a minority stake in BODYARMOR, making them the second largest shareholder behind Repole. Today, BODYARMOR is the fastest-growing sports drink within the category.

About the Alzheimer’s Association

The Alzheimer’s Association is the leading voluntary health organization in Alzheimer’s care, support and research. Our mission is to eliminate Alzheimer’s disease through the advancement of research; to provide and enhance care and support for all affected; and to reduce the risk of dementia through the promotion of brain health. Our vision is a world without Alzheimer’s®. Visit alz.orgor call 800.272.3900.

Established in 2018, the Ryan Blaney  Family Foundation  is  a 501(c)3 organization dedicated to supporting causes  that  personally impacted  the  Blaney family.  For  more information   on the Foundation or to make a donation, visit www.RyanBlaneyFamilyFoundation.organd follow on socialmedia: