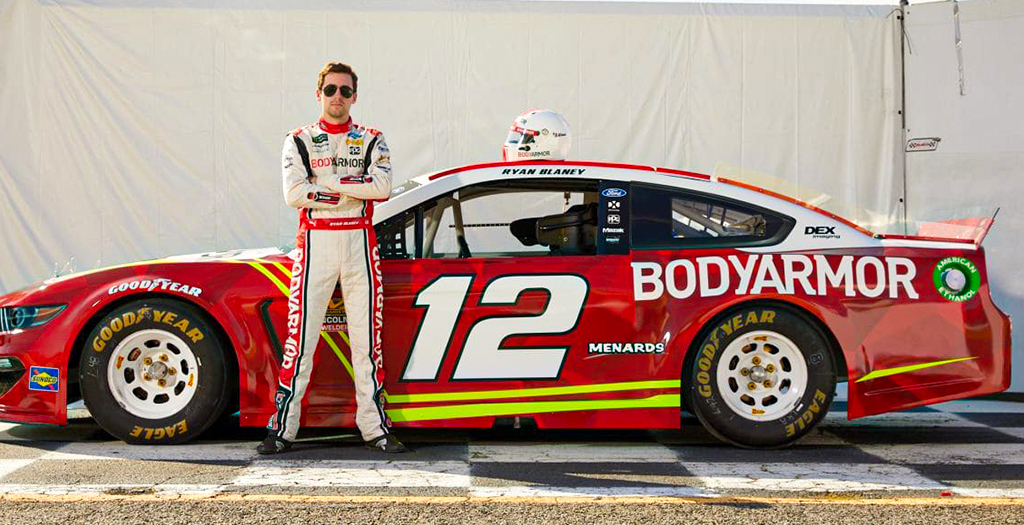 Ryan Blaney spoke to Beyond the Flag about his relationship with BODYARMOR as well as his thoughts on several topics pertaining to the upcoming 2020 NASCAR Cup Series season.

We recently had the opportunity to talk with Team Penske NASCAR Cup Series driver Ryan Blaney about his relationship with sponsor BODYARMOR SuperDrink, the American independently owned sports drink based in Queens, New York.

Blaney, who has driven the #12 Ford for Roger Penske’s team since he was promoted from the Team Penske-affiliated Wood Brothers Racing after the 2017 season, also shared some of his thoughts about the upcoming season, including some of the changes from 2019 to 2020, from the team’s crew chief lineup to the schedule overhaul and more.

Here is what the 26-year-old had to say in this interview. Special thanks to Ryan Blaney and BODYARMOR for making this interview possible.

Beyond the Flag: Ryan, thanks for your time today. First of all, I’d like to ask a few questions about one of your sponsors. How did your partnership with BODYARMOR get started, and what aspects of it have made it most successful thus far?

Ryan Blaney:  We got started around 2015 or so – when I was just getting into the Cup Series and BODYARMOR was still pretty young. It was just a mutual call at first as they were interested in a NASCAR driver and they apparently liked my style. I went up there (to New York) and met with them and they were all just great people. It amazes me going into the building now – their BODYARMOR HQ in NY – and seeing it compared to what it used to be back in 2015, 2016. The brand has just grown a lot.

BTF: What are a few things you think NASCAR fans should know about BODYARMOR that they might not know?

Blaney: BODYARMOR is very involved and committed to making a better sports drink. Honestly they haven’t been around for very long but the progress they’ve made in such a short time just kind of shows the passion they have. I look at other sports drinks and they don’t come out with nearly as many flavors as BODYARMOR does, and that just shows that they’re always trying to improve and get better.

Whenever I go up to visit, I just see the dedication that everyone has there. I mean, they’re in NASCAR. I don’t see any other sports drinks sponsoring race cars and things like that and doing as much as they do. So it’s really those little things that show an insight on how their company works. And I think the neatest thing is that they’re striving to be number one – and it’s hard (for others) to see that without being a part of (the brand) firsthand.

BTF: How have the driver/crew chief lineups for 2020 gone over within Team Penske, specifically among you and your two Cup teammates?

Blaney: Brad (Keselowski), Joey (Logano) and I have a good relationship. I feel like our whole group has a really strong relationship compared to other teams. We’re all very close and I feel like that’s what you need to be a successful organization. I mean, what’s the point of having three or four cars per team if you don’t work together, if you don’t build off each other? That’s how you get better as a driver and as a company. So I’d say our relationships between each other are very strong.

I drove for Brad’s truck team for a while so he’s obviously been a big mentor to me, and someone I can lean on. And Joey has been very successful – and came in this sport when he was very young, like myself. We all work off each other well and I feel like it’s a strong relationship.

BTF: What tracks will you be most aiming to improve at looking ahead to next season?

Blaney: You can always be better anywhere and everywhere. But the tracks you want to improve on the most probably are the ones you struggle at currently. Richmond kind of stands out to us as a place where we’ve struggled at a little bit throughout the years. And it’s a very important race. Obviously it’s in the playoffs and it’s in the first round, so you can’t afford to have really any rough races, so you need to figure it out. But that track stands out to me as a place we need to get a little bit better at.

BTF: How does your mindset entering a huge race like the Daytona 500 differ from any other race, if at all?

Blaney: My mindset doesn’t really change in that instance. Your goal for every race – no matter which one it is – is to try to win. But you do understand what you’re going for with the 500 – you know the history behind it and you know what it would mean to be able to win it and pull it off. But my mindset isn’t any different. You just go into it trying to find the best way you can to win. You definitely know what’s at stake.

BTF: Do you have any interest in any other racing series outside NASCAR?

Blaney: I do. People in motorsports, you’re always interested in other forms of motorsports, and different cars. They’re kind of fascinating (to me) because not all the cars are very similar at all. From our stock cars – let’s say to IndyCar or F1 or V8 Supercars in Australia, they’re all way different. So drivers want to feel how different they are. Just what little tendencies you have to do compared to what you’d normally do in NASCAR. So I would do any other form of racing and at least try it out. Really all but probably MotoGP – those guys are pretty nuts. I would like to stick with four wheels.

BTF: What are your thoughts on the playoff schedule overhaul?

Blaney: It’s way different. This year was a big shakeup with some races getting knocked out and some new tracks getting in. I enjoy it, I like it. Especially moving the championship race. I feel like you should rotate that around every year. You know, the Super Bowl doesn’t go to the same city every single year. So (with the switch) I feel like you give fans an opportunity – you give other areas – a chance to have a big event. It’s going to be interesting this year for sure.

BTF: Who are some of your inspirations that have helped you to get where you are today?

Blaney: Obviously my dad [Dave] was a big contributor – just growing up, watching him race and wanting to do what he did. He was with me every step of the way. Even when he was off racing NASCAR when I was younger, we tried to make it (as a family) to as many as we could. So that part was great, but it’s funny now how it’s kind of swapped. He doesn’t really race anymore – he races a little bit of local short track stuff but he’ll come to a lot of my races and help me out. It’s pretty neat how it went from me watching him to him watching me now.

Other guys I looked up to, Jimmie Johnson obviously was dominating the sport when I was growing up racing late models. And as a kid, how can you not want to be like that? So it’s been a blast to race with him here the last handful of years. I’d say those two guys really are people I looked up to.

BTF: If you could pick any career other than a race car driver, what would you be doing right now?

Blaney: I have no idea. I just grew up in the sport. Watching my dad every single weekend. I started racing when I was eight years old. I played other sports – I played basketball a lot, baseball and things like that. I just didn’t really have the love for those that I did for racing at the end of the day. And I’m 5’8” so I couldn’t really go play any of those sports and be as successful haha. But that’s a hard question. I get asked that a lot it’s just something I’ve never really thought about.

BTF: As one of the drivers who is considered a part of the “youth movement”, what are some of the steps you think NASCAR could take to get more young fans (really anywhere from elementary age to college age) involved in the sport?

Blaney: Nowadays it’s so easy to watch (live events) on your phone or on your TV – you can get access pretty much anywhere. So I think just making it more of an event again – that could help people appreciate the sport. There are other things to do (at sporting events) other than just the sport or watch the game. So I feel like NASCAR is actually doing a pretty decent job and already trying to make that happen. There’s other things going on around our races – and the tracks are so big in the infield – you can put on some really cool shows or events. Overall, I feel like it’s trending in the right direction.