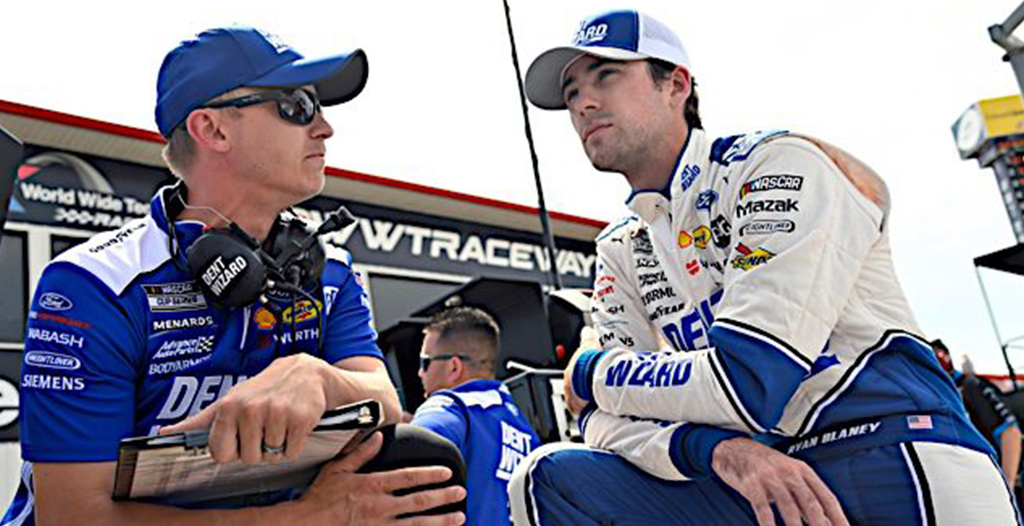 MADISON, Ill. – Ryan Blaney had an excellent Ford Mustang for much of the Enjoy Illinois 300 presented by TicketSmarter Sunday (June 5).  Blaney started in fifth and ran well early on. He moved up to third before trouble struck.

On lap 94, Blaney cut his left-rear tire entering turn 1 and spun, tapping the outside wall in the process. Blaney was able to drive away, but his track position was shot.

“As soon as I lifted going into turn 1, I felt [the car] dragging and I just spun out,” Blaney said after the race. “Luckily, we didn’t pound the fence. I kind of caught it early enough to not be full speed when I got to the corner.”

The spin put Blaney down the order as the tire failure occurred after only 27 laps. Luckily, Blaney could rely on his good pace.

“Our car was really, really fast,” Blaney continued. “That helped, for sure. It was kind of hard to pass, especially once the outside line got to be dominant. It would leave the bottom [line] open a little bit, but it was rather tough to put the power down. If your car was good enough, you could do it.”

In regards to the race that fans at the track and those watching on FOX Sports 1 saw, it was a little different than Blaney thought it was going to be.

“…I thought the track did a great job and it made for a pretty exciting finish,” Blaney said. “I’m sure that we can learn some stuff and make it a little bit better. I was pleasantly surprised. I honestly thought they put on a good show.”

Blaney was ultimately able to get himself up front in time to play a critical role in the finish of the race. Blaney chose the inside of the second row for the final restart, right behind teammate Joey Logano after Kyle Busch chose the outside line. On the restart, Blaney gave Logano a push to try to ratchet up Logano’s momentum. This extra oomph pushed Logano into the lead… and up the track.

“I was hoping that they pulled a Jimmie [Johnson] and Martin [Truex Jr.] at the (Charlotte Motor Speedway) ROVAL,” Blaney stated. “That’s why I chose the bottom [on the final restart]. I thought it was my only chance to win.”

Blaney’s fourth-place finish keeps him fourth in points. Thanks to Chase Elliott‘s 21st-place finish, he gained 25 points on the leader. He is now 28 points out of the lead with 11 races remaining in the regular season.