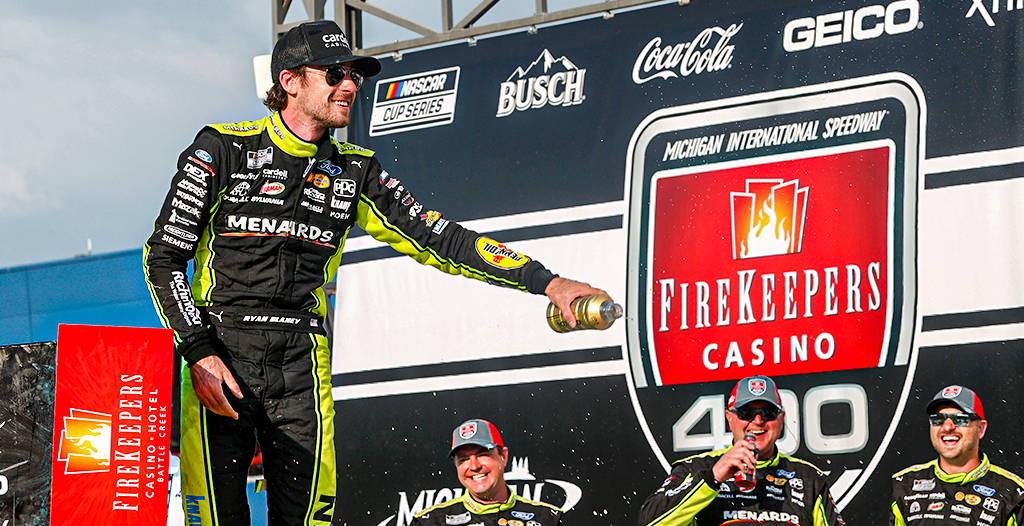 Ryan Blaney took the lead on a restart with eight laps remaining and skillfully held off a frantic field to earn the victory Sunday in the FireKeepers Casino 400 at Michigan International Speedway in the penultimate race of the NASCAR Cup Series regular season.

Those eight laps out front were the only laps Blaney’s No. 12 Team Penske Ford led on the afternoon but it was good enough to give him his second victory of the season — by a modern-day track-record margin of .077 seconds over Hendrick Motorsports’ William Byron, who had teammate Kyle Larson close behind.

Blaney credited Joe Gibbs Racing driver Kyle Busch with giving him a push from behind on the final restart to get out front, and the popular 27-year-old Blaney took it from there, using all the track to keep the field behind him.

“We got a great push by the 18 (Kyle Busch) on the restart and were able to get clear there,” Blaney said. “Michigan you pretty much run wide open and just play the air game.

Blaney conceded he didn’t necessarily consider himself an odds-on favorite coming into the race but credited his team for the improvements they made to his Ford all day. He finished runner-up at Indianapolis last week, giving the organization some well-timed momentum heading into the Playoffs in two weeks.

As with his late-race rally at Indy, Blaney made steady gains all afternoon. Most of the early race was a battle between Larson (who led 70 laps), Elliott (68) and Hamlin (10) – the three drivers combining to lead 148 of the 200 laps.

Different pit strategies affected the final run – with some drivers getting a variation of two tires or four tires with their fuel. When the final stops cycled out Byron led Larson and Hamlin. A brief caution came out for rain with 21 laps remaining and another for a seven-car accident with 14 laps to go.

“Honestly I think I was maybe a little too patient behind the 12 (Blaney),” said Larson, who leads the regular-season championship standings by 28 points over Hamlin with only one race left to decide the 15-point championship bonus. “Just made a couple wrong moves and allowed Blaney to get by me.

“I was never close enough to William (Byron) to help him generate a run on the 12,” Larson added. “Good points day. Wish we could have gotten more, but all in all, a good day.’’

Richard Childress Racing’s Tyler Reddick is in 16th place after a late spin and an eventful 29th-place finish. He holds a slim 25-point edge on his teammate Austin Dillon for the 16th and final Playoff position. DiBenedetto is 18th, 120 points behind, meaning he would have to win at Daytona to qualify for the Playoffs.

For much of the Michigan race, it looked like Dillon was in position to hold the upper edge going to Daytona. He ran top five (led a pair of laps) and moved that Playoff duel into a tie after the Stage 1 break.

But contact between Keselowski and Dillon just after taking the Stage 2 green-checkered flag spun Dillon’s No. 3 Richard Childress Racing Chevrolet across the track and hard into the wall. Dillon had crossed the line sixth and Keselowski seventh before the contact.

For his part, Keselowski immediately radioed his crew, “Man, I didn’t want to do that, I just wanted to hold him down (track).”

After being released from the infield care center, Dillon said he watched a replay and didn’t understand the hard racing after taking the stage flag.

“I was just trying to get as many stage points as I could get,” Dillon said. “Did a good job side-drafting. I was starting to come off the apron because it’s so rough down there. I figured by that point, he’d give me some room. Just hate it. I don’t know why it happened really. I thought I had a little room to come up and he just held me down there a little too long, I guess.”

Daytona has been a good venue for Dillon. The grandson of team owner Richard Childress won the 2018 Daytona 500 and has eight top-10 finishes in 16 starts there, including a third place back in February.

Elliott and Kyle Busch divided the stage wins before registering top-10 finishes. Elliott led 68 laps and dipped to eighth in the final order. Busch rallied after sustaining minor right-front damage in an early scrape with teammate Truex, then overshot his pit stall on his final stop. He wound up seventh.

The NASCAR Cup Series’ next race is Saturday’s Coke Zero Sugar 400 (7 p.m. ET, NBC, MRN, SiriusXM), the regular-season finale. The playoff field of 16 title-eligible drivers will be set after the 400-mile event.

Notes: Ford retained the Michigan Heritage Trophy, presented to the winning manufacturer at the 2-mile track. Ford drivers have won the last seven Cup Series races at Michigan. “This is such a big deal for our company, for our employees,” said Mark Rushbrook, the global director of Ford Performance. “To come here and race in front of all of our employees and their friends and families and have Ryan go get that win with Team Penske and Roush Yates power. We are taking the Heritage Trophy back to Dearborn.” … Post-race inspection was completed in the Cup Series garage without major issue. The No. 42 Chip Ganassi Racing Chevrolet (driver Ross Chastain) lost an axle during the race, which will result in a one-race suspension for car chief David Fero. Two teams — the No. 23 23XI Racing Toyota (driver Bubba Wallace) and the No. 51 Petty Ware Racing Chevrolet (driver Cody Ware) — were found with one unsecured lug nut each in a post-race check. … Part-time Xfinity Series competitor Josh Berry finished 26th in his second Cup Series start. Berry subbed in for the No. 7 Spire Motorsports team after Corey LaJoie was sidelined this week under COVID-19 protocols.