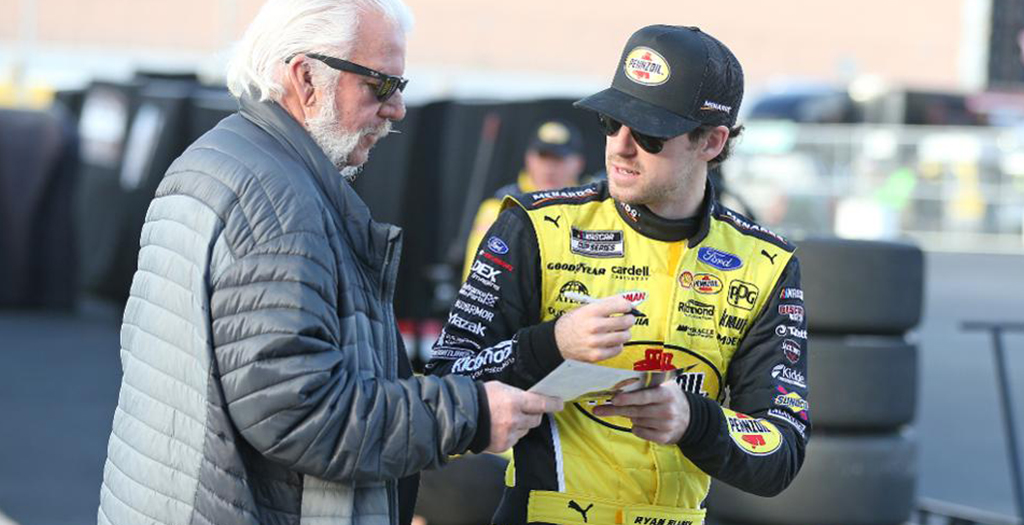 The NASCAR season is arguably one of the more grueling schedules in professional sports.

38 races spanning 10 months with only a couple of weekends off. Drivers fly out to courses on Thursday and are on the track for the majority of the time until they fly back home late on Sunday night after a race. It’s a grind that can challenge you both mentally and physically, but it’s all a part of what Ryan Blaney loves about the sport.

“You’re almost gone more than you’re home during the season,” said Blaney on behalf of BODYARMOR. “That’s a lot of time away from family, home and crew team is in the shop on Monday mornings right after the race, getting ready for the next week. It’s a lot of work that goes on during the season.”

Just three races into the season and Blaney has been one of the strongest drivers, leading the points standings. He’s also been in contention to win each of those races but has had some misfortune rear its head in each one. He’ll get another shot this Sunday at Phoenix Raceway.

We caught up with Blaney to discuss his goals for the season, the grind NASCAR and the time he got to share some insight on his love with Kobe Bryant.

What are some things you do in the offseason to relax and recharge for another season?

We have a few months to relax so I take a big group trip every year to just kind of get away from the winter months in North Carolina. It’s good to recharge your batteries and see some family. When the playoffs start, you’re so busy and not able to spend a lot of time at home. You’re also training to stay in race shape. When you’re racing every weekend, it’s easy for me to stay in shape because you do it all the time. In the offseason, if you’re going three months without it, you have to put a bigger emphasis on it. It’s even better when I can finally get back to the racetrack because it’s what I love to do and you miss it after not being in a race car for a few months.

What were your goals coming into this season?

Obviously, your typical goals are to do better than you did the year before. Whether that’s win more races or whatever. My biggest goal is to get to the championship and that’s something as a whole that we did not do last year, which was unfortunate, and we haven’t been able to make it before. That’s a big goal of ours this year and see what we can do once we get there. That’s what we’re focused on and that’s what we hope to make happen.

Your sport requires a different level of fitness than any other one. Can you describe what race shape is?

Most of us are pretty small. You have some guys who are over six-feet tall and might be muscular but it’s not like the training you go through with the NFL, NBA, or MLB. We work a lot on core strength and durability. It gets so hot in these race cars, especially in the summer months. You get up to 140 degress so we try and heat train the best we can. Staying hydrated is one of the biggest things that we have to do. You lose so much throughout one of these races. I think that’s why the partnership with BODYARMOR is great because it just kind of fits, as far as the pre-race, during the race and especially post-race. That’s so critical to help you get back to feeling normal.

What’s your fluid intake leading up to a race?

It’s really an everyday thing. You definitely want to do it two to three days before the race. If you’re waking up on a race day and you’re starting to chug water, it’s kind of too late at that point. You really want to start hydrating a couple of days before the race just so that it flushes out things in your system. I don’t have a week or weekend routine. I just kind of rotate from the original BODYARMOR to the LYTE, to their water for my rotation.

A lot is made about the grind of other sports, but NASCAR is no exception.

It’s pretty much from Valentine’s Day to Thanksgiving. We only have a couple of off weekends in that time, so it’s a huge grind. Throughout the season, we’ll have Monday, Tuesday and Wednesday at home. We fly out to the races on Thursdays. We’re on the track all weekend and we get home really late on Sunday nights. It’s a lot of work that goes on during the season and it’s the longest professional sports season that there is. It can take a toll on a lot of people but it’s what I love doing and everyone is doing it because they love it.

What would you say is most critical for you in making sure you’re ready for the next race?

Post-race and recovery is big for me and I really look at that as trying to get your body back to normal the best you can right after races because you’re just drained. When we get to these July races, it gets really hot. There’s no airflow in these cars and you get a little bit through your helmet but it’s sealed off so much, there’s just zero airflow through them. Then you have all the torque that puts tremendous pressure on your body throughout 500 miles. That definitely takes a toll on you but I think we do a really good job of staying hydrated during the race and after to make sure you can wake up Monday morning feeling great and ready to get after it again.

Kobe Bryant’s untimely passing has affected not only the basketball community but it has resonated across all of sports. You got the chance to meet with him and impart some knowledge onto him about what you do. What was that moment like?

It was really special getting to talk to Kobe for 20 minutes a couple of years ago at an event in Las Vegas. I was able to give him the firesuit from that race, but it was really neat. I grew up watching Kobe and what kid didn’t, as he was coming into the league and making his mark with amazing determination? His mindset was pretty awesome. We got to talking about racing and he didn’t know much about what we did and he wanted to know everything about it. I thought that was the coolest thing and he was so in tune with wanting to learn more in a short amount of time.

You can see how that carried over to basketball and that dedication to wanting to know everything and wanting to be the best. I think (his passing) impacted so many people because he influenced so many young boys and girls to want to be like him and have the same work ethic. It’s been unbelievable to see how many people he impacted and social media has been amazing with the tributes and stories. I’ll never forget that moment of meeting him. It was such a tragic event for his family and the families involved. It really shows the amount of influence he had on not only the country but the world.