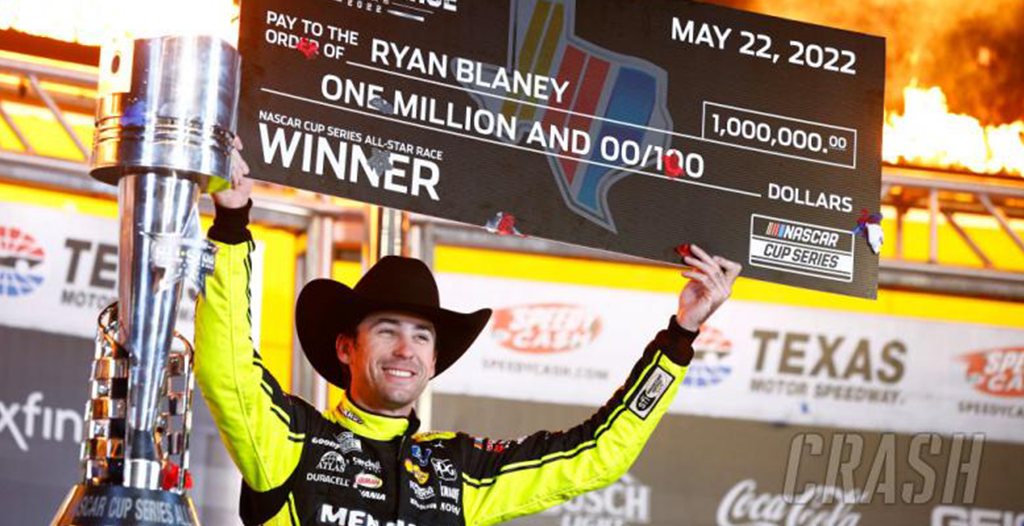 AFTER ALL-STAR VICTORY, RYAN BLANEY LOOKS TO MAKE IT 2 GRAND SLAMS IN A ROW WITH COCA-COLA 600 WIN

Blaney’s best finish in the 600 has been third. But with the confidence he and his team gained at Texas last Sunday, a second straight win is certainly in the realm of possibility.

One week after winning NASCAR’s All-Star race at Texas, Ryan Blaney is looking to win yet an even bigger race.

Blaney will be one of the 37 drivers entered in Sunday’s Coca-Cola 600 – the longest and most grueling race in NASCAR.

The Team Penske driver, whose best finish in the 600 was third in 2020, will mark the occasion by debuting a brand new paint scheme on his car this weekend, thanks in part to longtime sponsor BODYARMOR.

“This weekend, we’re going to have the BODYARMOR EDGE car for the 600,” Blaney said in an interview with Auto Racing Digest. “It’s a special paint scheme for a special event. I couldn’t think of a better combination.”

Indeed there perhaps is no better sponsor for a driver to have in NASCAR’s longest race than a sports drink. Hydration will be extremely important for all drivers, as the 600 is not a sprint – it’s a marathon.

“You have to keep your body retaining fluids because you’re constantly losing them in the car,” Blaney said.

The 600 is also one of NASCAR’s crown jewel races. Up there with the Daytona 500 and Southern 500, it’s a race every driver wants to win at some point in their career.

Blaney understands what makes the 600 so special.

“I grew up pretty close to Charlotte Motor Speedway and watched dad (Dave Blaney) race for many years at the 600,” Blaney said. “You understood what the race is and you understand the grueling side of the race as far as having to stay physically and mentally in it the whole race.

“I think that payoff – if you can do it at the end of the race – means so much more because it is such a tough one to stay in for 600 miles.”

But Blaney is hopeful he call pull it off on Sunday. And if he does win, he won’t be the only one celebrating.

“I’ve had some pretty good runs in it in the past and hopefully this year we can finally break through and win it because it’s such a special race,” Blaney said. “It doesn’t only mean a lot to me. It’s everyone on the team who prepares these cars that can take 600 miles. It means a lot to them too.

“Not only do the drivers get pride in winning that race. It’s all about everyone on the team.”

All-Star win “more stressful than it needed to be”

When asked where he ranked his win in last Sunday’s All-Star Race at Texas Motor Speedway ranked among all the wins in his career, Blaney said it was “probably P1 on the most stressful side of it.”

“[It was] a lot more stressful than it needed to be, that’s for sure,” Blaney said.

Blaney was roughly 200 feet from crossing the finish line when NASCAR brought out a late caution due to a crash by Ricky Stenhouse Jr.

Normally, the race would have ended. But since the All-Star race had a provision stating it had to end under green, Blaney had to essentially win the race twice in a two-lap dash to the finish.

To add insult to injury, Blaney pulled his window net down as he thought the race was over. He had to hastily rig the net back into place in order to finish the race.

So where does Blaney rank it among his wins overall, stress and everything else combined?

“Super cool to do that in the fashion that we did it, but I don’t know,” Blaney said. “I feel that I’ve won a few other ones that are really special.

“That first Cup win (Pocono 2017) is obviously up there. But the All-Star race is such a cool event. And to do it the way we did it. We had everything in the bag and were cruising to the victory and then we got a big curveball thrown at us.”

But instead of striking out, he stepped back in the batter’s box and hit a $1 million grand slam. Now he’s hoping to do it again on Sunday.