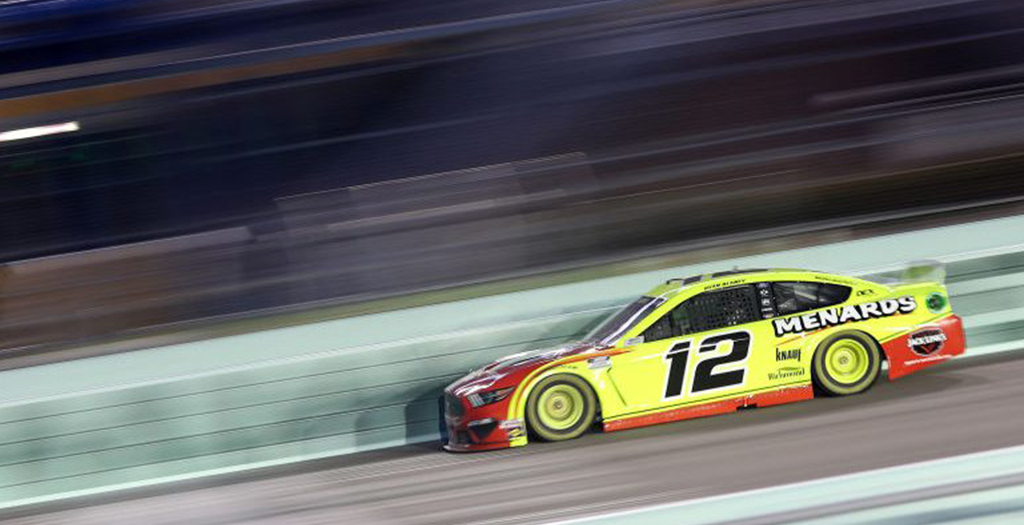 If not for an early spin and wreck at Bristol Motor Speedway last month, Ryan Blaney could be the owner of the best hot streak in the Cup Series through 12 races.

Instead, the Team Penske driver can simply take satisfaction in having top-four finishes in five of the last six races ahead of this weekend’s visit to Talladega, where he won last fall.

Blaney’s latest top five came Sunday night in Miami, where he drove his No. 12 Ford to a third-place finish behind race winner Denny Hamlin and Chase Elliott.

It completed a week where Blaney finished fourth at Atlanta last Sunday and second in Wednesday night’s race at Martinsville. But it also left him as the only Team Penske driver without a win this year.

Not one to openly brag or complain, the 26-year-old driver knows he could be doing far worse.

“We could be running 20th every week,” Blaney said after Sunday’s race. “You’re proud of the runs that you’ve created and the speed our team’s got. I’m proud of that. … The way I look at it is, just keep running up towards the front like that, I think those things come.

“Just proud of the speed we have, that we’re close. Just little things will go a long way when you’re this close. If you have to find 15 spots worth of speed, that’s when it’s troublesome.”

Blaney’s front-running speed comes in his first season with crew chief Todd Gordon, who was shifted from Joey Logano‘s No. 22 team to Blaney’s in the offseason.

Blaney observed that he and Gordon’s communication have led to key adjustments in recent races.

“To be able to communicate like that kind of in the early part of our relationship has been really nice. I look back at a lot of the … bad finishes we’ve had, of me wrecking in Bristol, tire coming apart at Fontana, the caution coming out in Vegas, we’ve had some really strong runs. That’s something to be proud of. …

“It’s been a nice run we’ve been on here. I can’t wait to get that first win together here soon. The group deserves it.”

Blaney and the No. 12 team take their streak to Talladega, the superspeedway where Blaney earned his third Cup series win last fall in the playoffs.

He followed that up with second-place finish in February’s Daytona 500.

Unlike those two races, the series will race on the 2.66-mile track with a new rules package, a result of changes made by NASCAR in answer to Ryan Newman‘s violent wreck on the last lap of the Daytona 500.

A practice session originally scheduled for teams to get acclimated to the rules package was cancelled over the weekend, meaning their first time at speed with it will be when the green flag drops Sunday.

With the new package, Blaney hopes the runs drivers are able to make on another car “aren’t as big.”

“That was something that we talked about with NASCAR,” he said. “The runs were gigantic. We get hooked up, that made your runs even bigger. … There’s a fine line. You need the draft to work to where you get runs on cars, but not monstrous drafts where it’s dangerous to kind of block them and things like that. Hopefully we can find a fair in-between.”

Regardless of the rules package, Blaney recognizes his momentum from the last six races doesn’t mean much with the unpredictability of Talladega.

“That’s just a whole other beast,” Blaney said. “We say it all the time: you get caught up in someone else’s stuff, it’s just part of it. … As far as the momentum side, yeah, you feel good for sure, stringing together some decent runs. It’s hard to kind of carry that over to Talladega. You just never know what can happen.”